Bobby Moore was named Britain’s sports personality of the year in 1966 after leading England to triumph in the soccer World Cup, and now another Captain Moore has become a surprise contender to follow in his footsteps — at the age of 99.

World War Two veteran Tom Moore has raised an astonishing 15 million pounds ($19 million) for the National Health Service (NHS) as it fights the coronavirus epidemic – by walking 100 laps of his garden.

Wearing a blazer bedecked with his medals, he covered the 25-metre circuit with the help of a wheeled walking frame, completing the challenge just two weeks shy of his 100th birthday on April 30.

Boxer Tyson Fury and Liverpool soccer captain Jordan Henderson are the hot favourites to pick up the award at an annual gala hosted by the public broadcaster, the BBC, in December.

But the lack of sporting action due to the pandemic meant Moore’s odds were cut to 50/1 against by the bookmaker William Hill. 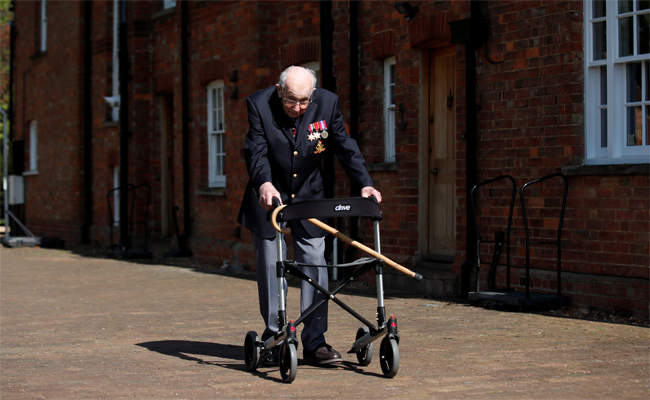 Stokes, who won the award last year for his 50-over World Cup-winning heroics and Ashes performances against Australia, said he hoped he would be moving as well as Moore when he was 50, let alone 100.

Health Minister Matt Hancock called Moore a “shaft of light” as Britain deals with an epidemic that has already killed 12,868 people.

An online petition for Moore to be knighted by the queen has already received more than 326,000 signatures.