The Centre of Thursday claimed that India has ‘gone quite ahead’ on its way to winning the war against Covid-19. The statement from Union Health Minister Harsh Vardhan came as his ministry claimed that India’s coronavirus recovery rate has reached 25 per cent with just 3.2 per cent mortality rate, even as the toll from the deadly virus neared 1,100 and the national tally climbed to over 33,600.

Union Health Minister Harsh Vardhan said India is doing better compared to other countries on all parameters in its fight against Covid-19 and should be able to win this decisive war in the coming few weeks.

Meanwhile, the states began preparations to help lakhs of migrant workers and students reach their homes from different parts of the country where they are stranded for over a month due to the Covid-19 lockdown.

As the nation nears the end of the Lockdown 2.0, the economic fallout of the strict restrictions has started to become increasingly visible. A study by the International Labour Organisation has claimed that almost 50 per cent of the global workforce faces job loss. Its effects in India are also increasingly visible as industry experts say it will take around six quarters for several industries to get back on their feet.

Here’s your Thursday’s wrap of top developments on Covid-19 outbreak in India:

Even as India reported 1,823 new cases and 67 deaths due to Covid-19, the Union Health Ministry claimed that India is on the path of victory as the recovery rate has reached over 25 per cent.

As per Union Health Ministry data, the total death toll due to Covid-19 rose to 1,075 and the number of cases climbed to 33,610 in the country on Thursday. The number of active Covid-19 cases stood at 24,162, while 8,372 people have recovered, and one patient has migrated, the ministry said.

The total number of cases include 111 foreign nationals.

A total of 67 deaths were reported since Wednesday evening of which 32 fatalities were from Maharashtra, 16 from Gujarat, 11 from Madhya Pradesh, three from Uttar Pradesh, two each from Tamil Nadu and Delhi and one from Karnataka.

The death toll reached 27 in Tamil Nadu, 26 in Telangana, 22 in West Bengal while Karantaka reported 21 deaths. Punjab has registered 19 fatalities so far. The disease has claimed eight lives in Jammu and Kashmir, four in Kerala, while Jharkhand and Haryana have recorded three Covid-19 deaths each.

Bihar has reported two deaths, while Meghalaya, Himachal Pradesh, Odisha and Assam have reported one fatality each, according to the ministry data.

According to the Health Ministry data updated in the evening, the highest number of confirmed cases in the country are from Maharashtra at 9,915, followed by Gujarat at 4,082, Delhi at 3,439, Madhya Pradesh at 2,660, 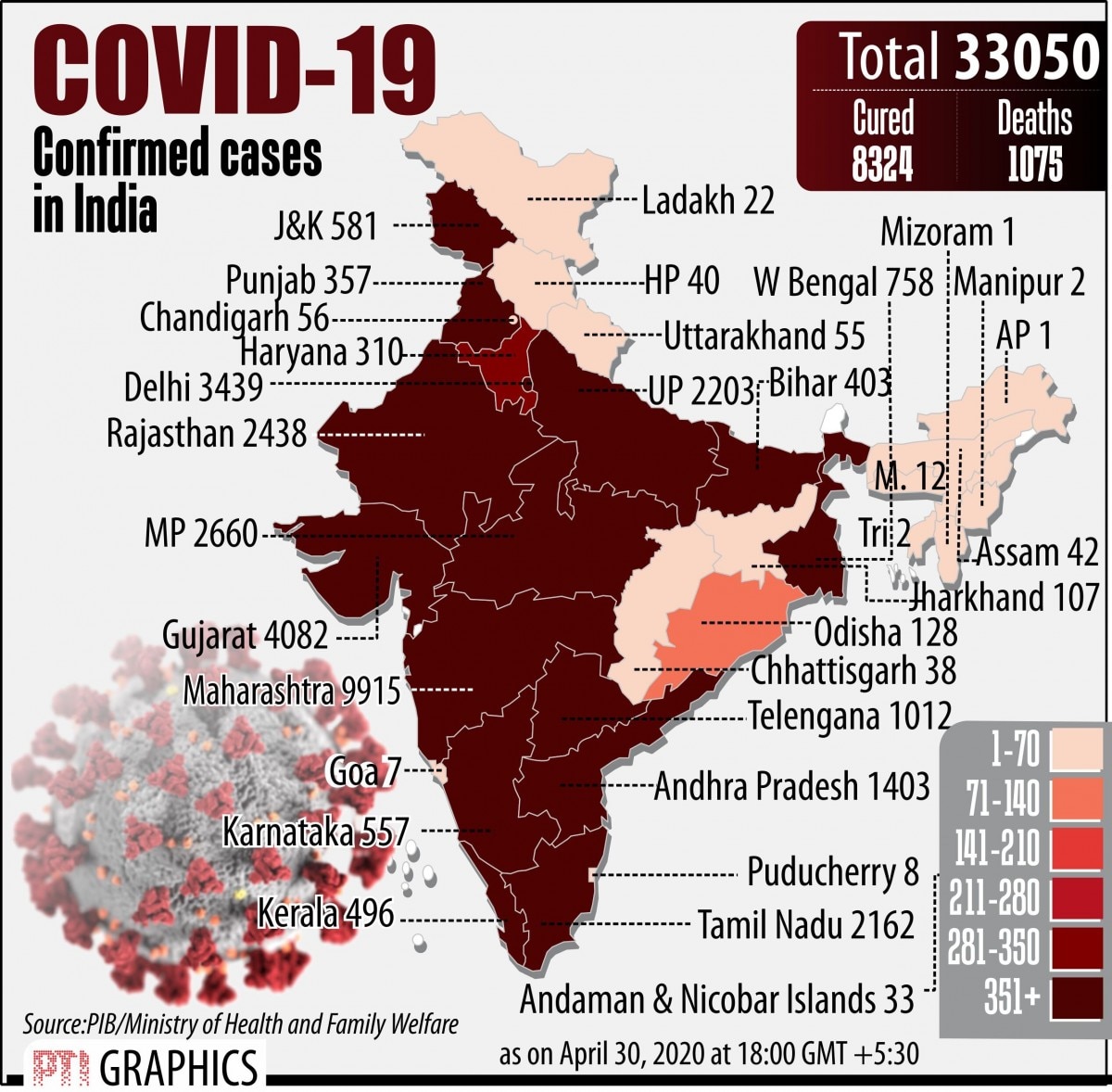 Manipur and Tripura have two cases each, while Mizoram and Arunachal Pradesh have reported a case each.

“Our figures are being reconciled with the ICMR,” the ministry said on its website adding, “280 cases are being assigned to states for contact tracing.”

States wise distribution is subject to further verification and reconciliation, it said.

Bengal attributes 72 of 105 deaths to co-morbidities

At least 105 patients diagnosed with Covid-19 have died in West Bengal — 33 directly due to the disease and the rest because of co-morbidities, Chief Secretary Rajiva Sinha said on Thursday.

Eleven people have died due to coronavirus infection recently in Bengal, he said, adding that an experts committee constituted by the state government for conducting an audit into Covid-19 deaths submitted its report to the health department earlier in the day.

“The expert committee has examined altogether 105 cases. Of that, 33 were found to have died due to Covid-19 infection. And the rest 72 deaths were attributed to comorbidities, where Covid-19 was incidental. The committee submitted its report today and these figures are not of a single day,” Sinha said told reporters at the state secretariat.

With over more than 8,300 people recovered of novel coronavirus in India, the country’s recovery rate has reached 25.19 per cent from 13 per cent a fortnight ago.

While virtually interacting with civil society organisations (CSOs) and non-governmental organisations (NGOs) on Covid-19 issues at an event organised by Niti Aayog, the Union health minister said, “We have gone quite ahead towards winning this war against Covid-19.”

Elaborating further, he said the country has done better on “all our parameters compared to the rest of the world. And I am sure in the coming few weeks, we should be able to win decisive war against Covid-19”.

At a press briefing on the Covid-19 situation, Health Ministry’s Joint Secretary Lav Agarwal also said the doubling rate for Covid-19 cases has improved to 11 days as against 3.4 days before the lockdown was imposed.

India’s recovery rate is comparable to global 30.6 per cent and death rate is almost half of the global rate of 7.1 per cent.

The Delhi government on Thursday ordered screening of all people living in Covid-19 containment zones at least thrice within 14 days of identifying such areas.

The move comes in the backdrop of several people testing positive for coronavirus in containment zones despite restrictions imposed there.

At present, there are 100 containment zones in the national capital.

According to an order issued by Chief Secretary Vijay Dev, every person living in containment zones will be encouraged to download ‘Aarogya Setu’ app.

Until now, surveillance teams constituted by the authorities were conducting door-to-door survey and enquire people whether they had cough, fever and other symptoms of Covid-19.

If anybody had cough and fever, he or she was required to undergo screening.

The Union Health Ministry has said that none of the international studies on Covid-19 have produced any conclusive results yet.

On being asked about US study on remdesivir, Health Ministry’s Joint Secretary Lav Aggarwal said that the researches conducting the study have said that the trial is still on with some positive outcome, “but again, this is still inconclusive.”

Lav Aggarwal cautioned against hoping too much too soon from studies underway as he said that studies take time and have to go through various stages.

Earlier as well, the Centre had cautioned the public against deeming the convalescent plasma therapy as the cure Covid-19. While the therapy is being administered at various Covid-19 hospitals across India on a trial basis, Lav Aggarwal had said that it is still an experimental drug.

Several states, in the meantime, announced steps they were taking for facilitating the movement of migrant workers and students, stranded in various cities due to the lockdown, to help them reach their respective native places, in line with the Union Home Ministry guidelines announced on Wednesday. Some states have already brought back some migrant workers from other places.

The Madhya Pradesh government said it has brought back over 20,000 migrant labourers, who were stranded in other states due to the Covid-19 lockdown.

Maharashtra issued a notification designating all the district collectors as the nodal authority for the movement of stranded people into or outside the state and also within the state, While the Gujarat government appointed 16 bureaucrats as nodal officers to facilitate the movement of such people across borders.

The Kerala government renewed its demand for special non-stop trains to transport those who are keen to leave for their respective states. There are 3.60 lakh workers in over 20,000 camps in the state and majority of them, hailing from West Bengal, Assam, Odisha, Bihar and Uttar Pradesh, wanted to return home.

Punjab Chief Minister Amarinder Singh also urged the prime minister to arrange special trains for transportation of migrant workers, while he directed all deputy commissioners to prepare data of migrant labourers stranded in the state due to the lockdown.

The Karnataka government also allowed migrant workers, tourists, students and others stranded in different parts of the state to return to their native places. This will be a one-time movement and the government would arrange buses for those in need but they should bear the expenses, the state government said. 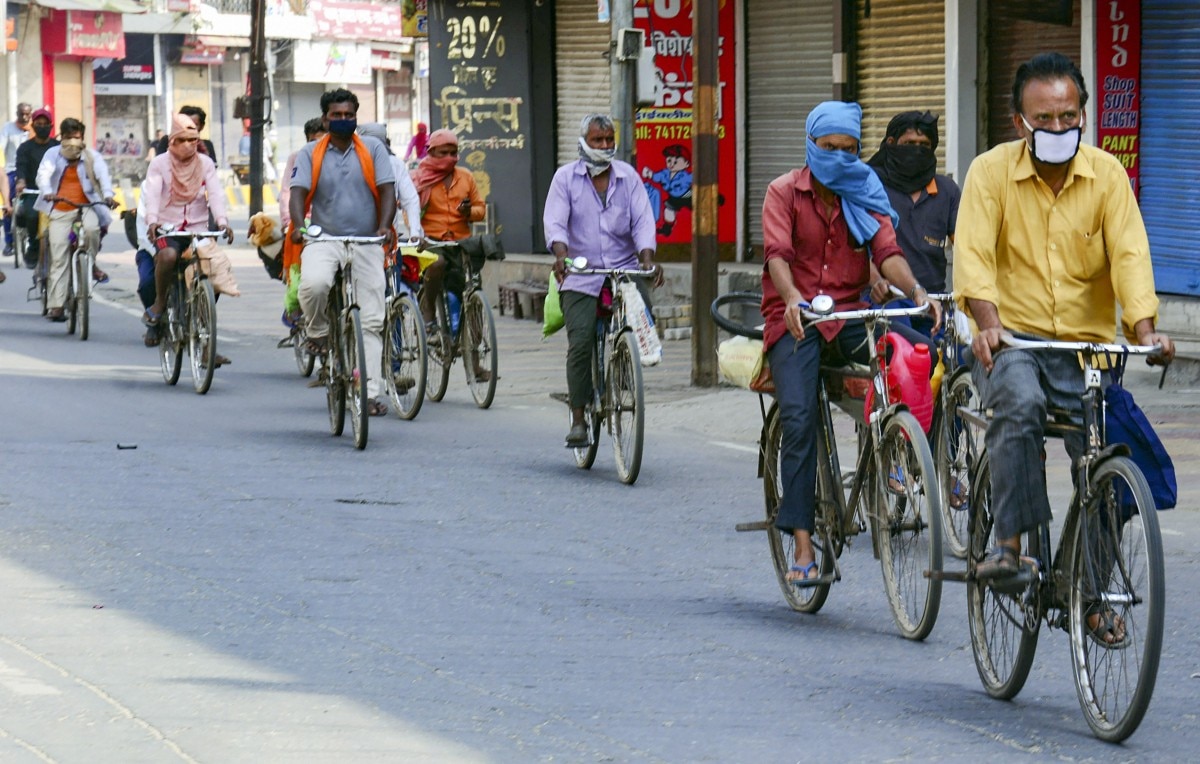 As per the Union Home ministry order, buses would be used for transporting the stranded persons and these vehicles would be sanitised and will have to follow safe social distancing norms on seating. A senior official said all states and UTs will have to “strictly follow” these guidelines.

While the movement of trucks is already allowed for transportation of goods during the lockdown, the Ministry separately clarified that no separate passes are required for their inter-state movement, including for those carrying goods or returning after delivery, and licence of the driver is enough.

There have been reports that movement of trucks is not allowed freely and local authorities insist upon separate passes at inter-state borders in different parts of the country.

As the Covid-19 curve begins to flatten in India, the concern is now shifting towards how to jumpstart the economy. Markets already ailing due to a cash crunch have now been crippled due to extended nationwide lockdown. With three days go for the Lockdown 2.0 to end, the economic experts and studies have started raising red flags over slashed jobs, salaries and lack of demand in the markets.

As part of E-Conclave series, India Today TV spoke to top market leaders who agreed that it will take a lot of time and effort to jumpstart the economy again.

According to Arvind Ltd’s Executive Director Kulin Lalbhai, a big section of retail sales is driven by non-essential goods, which are discretionary purchases and require disposable income. Kakbhai says, it will take at least four to six months for disposable income to come back and business to bounce back. Whereas TVS Group’s chairman Venu Srinivasan sees the consumer returning to shops after six quarters – one-and-a-half year – if the government doe snot pull all stops to put money into people’s hands.

And with the current trend, money is fast disappearing from people’s pockets as salaries get slashed and jobs are lost. International Labour Organization has predicted that almost 1.6 billion workers in the informal economy, nearly half of the global workforce, face an immediate danger of losing their livelihoods due to the continued sharp decline in working hours because of the Covid-19 outbreak.

In India, effects can be seen as big petroleum companies like Reliance Industries are issuing salary cutbacks.

Meanwhile, former RBI Governor Raghuram Rajan said India should open up up its economy in a measured way soon to save jobs and estimated that Rs 65,000 crore would need to be spent to support the poor amid the crisis.

Interacting with Congress leader Rahul Gandhi through video conferencing, Rajan said it is “all too easy to have a lockdown forever”, but that is not sustainable for the economy and India does not have the capacity to support people across the spectrum for too long.

A nationwide lockdown has been in place Since March 25. First it was announced for 21 days till April 14, but Prime Minister Narendra Modi later extended it till May 3 to contain the coronovirus pandemic.

Prime Minister Narendra Modi on Thursday held a “detailed” meeting to discuss the potential economic reforms in the mines and coal sectors to give a boost to the economy.

The discussions involved ensuring easy and abundant availability of mineral resources from domestic sources, upscaling exploration, attracting investment and modern technology to generate large-scale employment through transparent and efficient processes, according to an official statement.

In the meeting with top officials, the prime minister laid special focus on improving the country’s self-reliance in production of minerals and their in-country processing.