Gujarat COVID-19 Movement Instruction Guideline Declared
How to Get Curfew digitalgujarat.gov.in lockdownpass in Your State During Covid-19 Lockdown : One can avail e-pass to use or provide the essential services, including medical care, health care, chemists, police and security personnel, media services, electricity and water department, animal fodder and ration shops.

Instructions are issued to the trapped workers with the hope of the Government of India dated 17/5/2010 to allow them to move from one area to another according to the state. The following guidelines are enacted to implement a state-wide uniform system under this command: 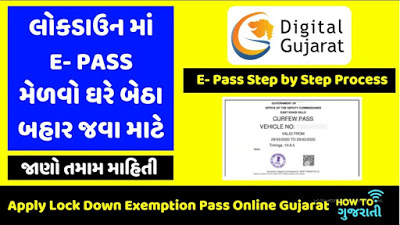 1. These instructions will be valid for movement within the state of Gujarat.

2 Pursuant to these instructions, persons shall be allowed to reach the place of business from where they are (in the district) to another place (in other district) for business-approved activities subject to periodic notification from the Government of India or to those who are farmers Enough permission must be given to reach the meaning. Occasions other than that may not be allowed under this instruction.

4. Individuals who want to go only to apply for a pass within the state in the Digital Gujarat Portal (Digital Gujarat) will have to get approval from the Mamlatdarshri in the area.

5 At the district level, a consolidated report of such clearance by the district control room shall be sent to the district to be reached twice a day along with the name of the person, details of identity, type of vehicle.

6 Before the sanctioning district approves, the district to which such persons wish to go must obtain a figure of how many persons may be accepted in respect of the structural capabilities of the district accepting them and do mamlatdar labor in the districts. Therefore, a larger number of persons should not go to the accepting district.

7 Starting in small numbers in the initial stage, keeping the structural Ravana in check, it will be necessary to increase the number of peacocks in stages.

9 Which reaches such persons in the district. They will have to ensure that they are quarantined for 15 days by the gram panchayat or municipality as per the guideline of the health department in their licensed village or city.

10. Under this circular, a person who moves to another district to engage in business or to engage in farming will not be allowed to move to another place until he has completed the quarantine period.

11. The district administration must ensure that such departed persons maintain the standards of social distraction even during transit and have to travel wearing masks.

13. Permission granted in the case of contract work of a government agency or in case of medical emergency and other emergency circumstances shall continue as usual.

12. Apart from this, the instructions given from time to time by the Ministry of Home Affairs of the Government of India will have to be implemented accurately.