With the tennis season being suspended until at least July 13, players are taking to social media to interact with each other and are also conducting live video sessions on Instagram. 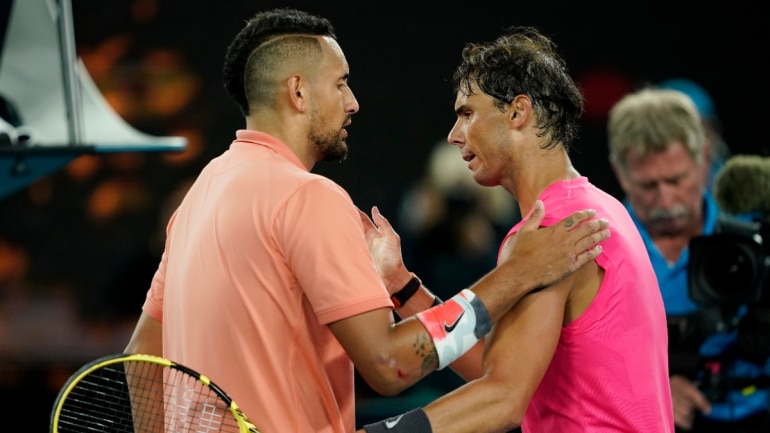 Nick Kyrgios and Rafael Nadal have had a hostile relationship on the court in the past but it seems like the Australian tennis star is ready to put their bitter rivalry behind as he has invited world No.2 for a live Instagram session.

The coronavirus outbreak has brought the sporting world to a halt and has also suspended tennis events until at least July 13. During this time, players are taking to social media to interact with each other and are also conducting live video sessions on Instagram.

Recently, tennis greats Rafael Nadal and Roger Federer also gave their fans a treat when the two interacted with each other on Instagram live.

On Sunday, BBC had posted on their social media that they would love to see Nadal and Kyrgios also doing face-time. Kyrgios responded to the request and invited Nadal for a video chat.

“Rafa lets do Instagram live together. I am down with it,” Kyrgios wrote.

In the past, Rafael Nadal had accused, Kyrgios of “lacking respect for public and rival”.

“He lacks a little respect for the public, for his rival, and also for himself. He could win Grand Slams and fight the top positions of the ranking, but there is a reason why he is where he is [at No. 72],” Nadal had said.

Kyrgios had snapped back: “He doesn’t know me, so I’m not going to listen at all. That’s the way I play. The way he plays, he’s very slow between points.”

This was after Kyrgios overcame a bout of nausea to beat Nadal in a three-hour, three-set thriller, during which the Australian used a mix of typically audacious drop shots and brute power to win 3-6 7-6(2) 7-6(6).

Before their encounter at Wimbledon last year, Nadal had tried to defuse the situation during a press conference where he said, “I’m too old for all this stuff now. What I said I said, and it’s something because I believe it. I am not a guy [who is] gonna be in a fight with nobody. I am here to enjoy my sport.”