NEW DELHI: That international cricketers are some of the most popular people in the world is no secret. It’s no surprise that countless people across the world want to emulate them. But then some take that obsession to another level. And if their facial characteristics match those of a cricketer, it only adds to that obsession.

Indian cricketers and their doppelgangers have made headlines over the years. The likes of Sachin Tendulkar, Virender Sehwag and Virat Kohli have fans who look a lot like them and who groom and style themselves to look and act more like their more famous look-alikes. 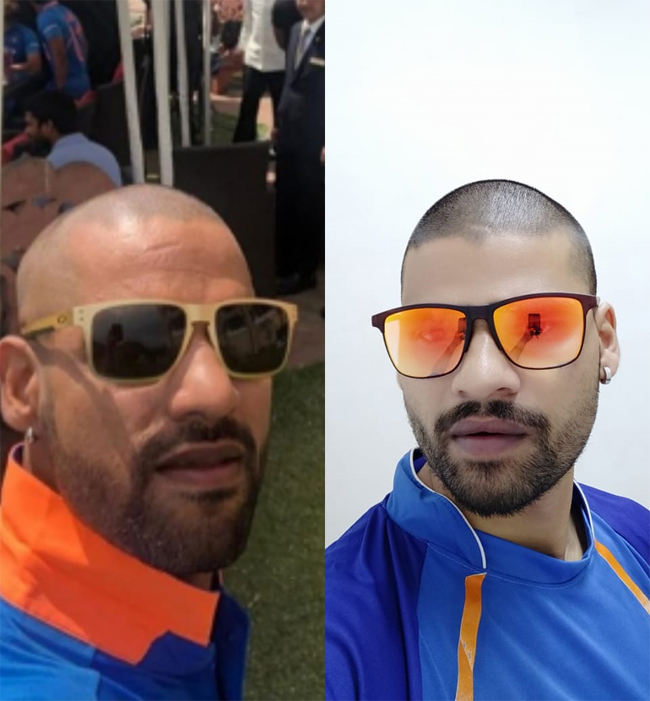 
In an exclusive interview with Timesofindia.com, the 27-year-old Ram Bahadur, who hails from Ballia in Uttar Pradesh and works as a computer operator in Lucknow, spoke about his mad obsession with Shikhar Dhawan, interesting anecdotes thanks to his looks and meeting the Indian left-hander and his family. Interestingly, it wasn’t he who realised that he looked a lot like Dhawan, but someone else.

The story behind the resemblance


This happened in 2013 when Ram Bahadur went to a nearby hair salon.

“After giving me a haircut, the barber said ‘bhaia, aap to bilkul Shikhar Dhawan ki tarah lagte ho (Brother, you resemble Shikhar Dhawan). He convinced me and twirled my moustache and asked me to look in the mirror. He showed me Shikhar sir’s picture as well. I looked into the mirror and came home. I bought a poster of Shikhar sir and glued it to my wall. I looked in the mirror again and again. I was happy that I resembled a cricketing icon. That’s how my madness for him began,” Ram Bahadur told TimesofIndia.com. 
“Since then, I have only gone to that same salon. I don’t go to any other barber shop. I visit the salon at least twice a week, mainly because of the moustache. I do what Shikhar sir does. He is God for me. I can do anything for him,” he said.

“I follow him very closely. I follow his style of clothing, hair, beard and moustache. And I apply the same to myself. As I said, he is a God for me. Whenever I meet him, I call him God. He asked me to call him bhaia (brother) but I refused. He is my God,” he said.

“I can’t buy expensive clothes like him. But I somehow manage to find similar kinds of clothes. He once posted his picture wearing a Dhoti (a lower garment for men in the Indian subcontinent). I searched for it in entire Lucknow but couldn’t find it. Someone told me that I can get a similar kind of dhoti in Varanasi. I booked my ticket, went there and bought one for myself,” Ram Bahadur said.

“I also have a tattoo inked on my forearm which says – My God Shikhar Dhawan,” he said.


Ram Bahadur’s obsession with Dhawan might have begun in 2013 but it took him two more years after that to meet his idol. In 2015, the UP born Bahadur got the chance to meet Dhawan during an IPL match between Sunrisers Hyderabad and Delhi Daredevils (now Delhi Capitals). 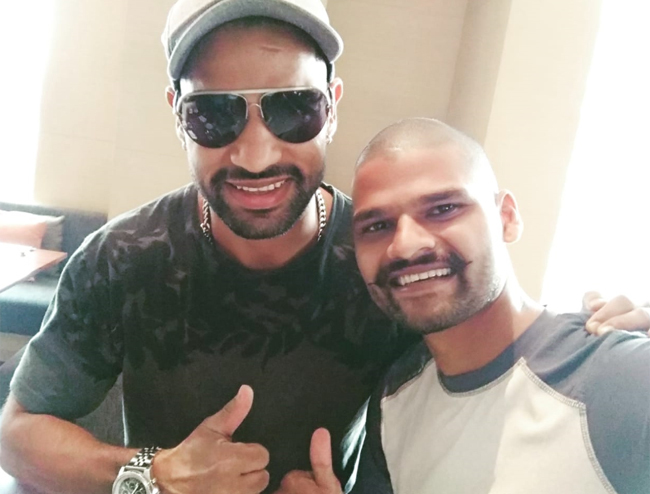 
“It was a hot and humid day in Raipur on May 9. I went to watch the Sunrisers vs Delhi match. I was waiting for the team bus outside the stadium. When the team bus came I was very happy to see Shikhar sir. I folded my hands. He looked at me and came out and hugged me. That was my first meeting with him and a memorable one. I was so exhausted and tired, but after the meeting I can’t tell you how I was feeling,” an emotional fan said.

“We started speaking with each other on Instagram and messages. The best thing is that he always replies to my greetings,” he said. 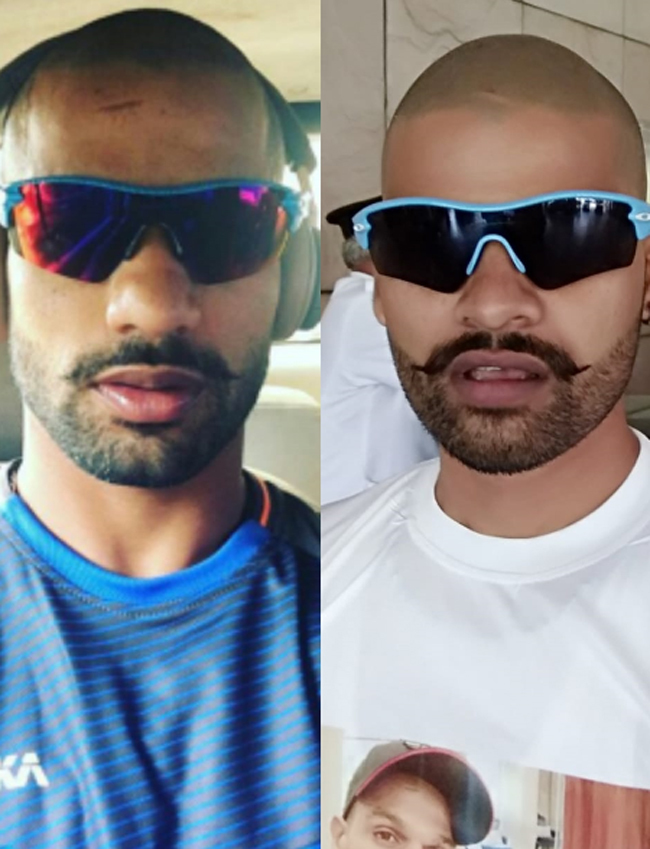 
“I went to meet him a day before the India vs New Zealand match in Kanpur (in October, 2017). I entered the stadium. He was running and practicing in the stadium. I shouted ‘God’. He looked and came. He met me with a smile and asked ‘did you get the match ticket?’. I said no. He asked me to come to his hotel and collect the tickets. I went to his hotel in the evening and he gave me the tickets,” Ram Bahadur told TimesofIndia.com.

“When he met me, I started crying in front of him. I couldn’t hold back my tears after seeing him up close and personal. Then he hugged me tightly in front of everyone. He also introduced me to his family,” the fan said. 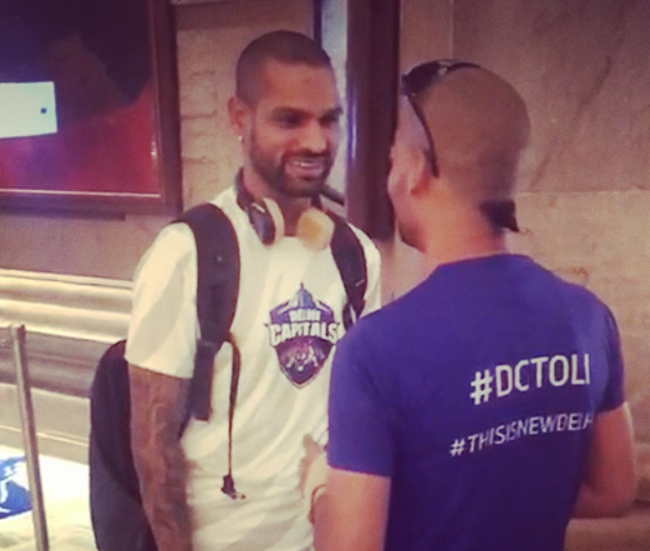 
“Since then, whenever there is an India match, I don’t have to struggle for a ticket. He has always arranged one for me,” he said.

“Ahead of every match, he plays, I seek his blessings and only then I sit down in the stadium,” the 27-year-old said.

“Whenever he takes a catch, I always do his kabaddi-style wicket celebration from the stands,” he said.

Interesting incidents thanks to his resemblance with Shikhar Dhawan


Ram Bahadur doesn’t miss a single match in the country when Dhawan is playing. He ensures he books his train or bus tickets well in advance to watch his idol bat.

Dhawan’s super fan Ram Bahadur went on to share a couple of incidents when he was mobbed by the public in the stadiums. 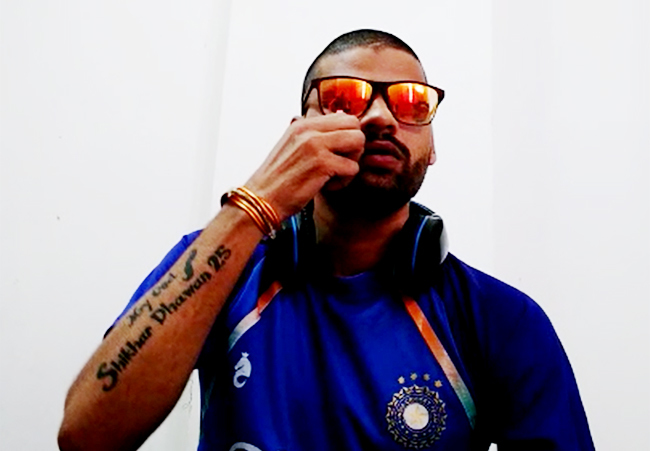 “I travelled to Delhi for the 2019 IPL match between Royal Challengers Bangalore and Delhi Capitals. I was watching Shikhar Dhawan bat. When he got out, I walked towards the balcony because I wanted to see him. The crowd looked at me after some time. They thought Shikhar had come up and mobbed me. I had to scream that I am not Shikhar Dhawan, I am his fan. There were fans in large numbers and they mobbed me. They started taking selfies with me and asking for my autograph. I suffered a sprain in my left leg because of that incident,” Ram Bahadur told TimesofIndia.com.

“I would like to share one more incident. Last year, I went to Delhi to meet him ahead of the IPL. I went to Feroz Shah Kotla stadium, but couldn’t find him. I clicked my selfie with his portrait at the Kotla ground and sent him a message that ‘God, I want to meet you. I am in Delhi’. He replied immediately and asked me to come to Gurgaon as he was busy on a shoot. He sent me his location. I reached the destination and contacted him again. He said wait at the location for 30 to 40 mins, as he was taking a break. I was standing where he was shooting. All of a sudden, the make-up artist and crew came with a chair and some snacks and started apologising. They thought I was Shikhar sir and they were keeping me waiting. They said… ‘sir you were supposed to come after 40 minutes, you are early’. I had to tell them that I am his fan not the cricketer Shikhar Dhawan. When Shikhar sir came, he introduced me to everyone. Everyone took selfies with me,” he said. 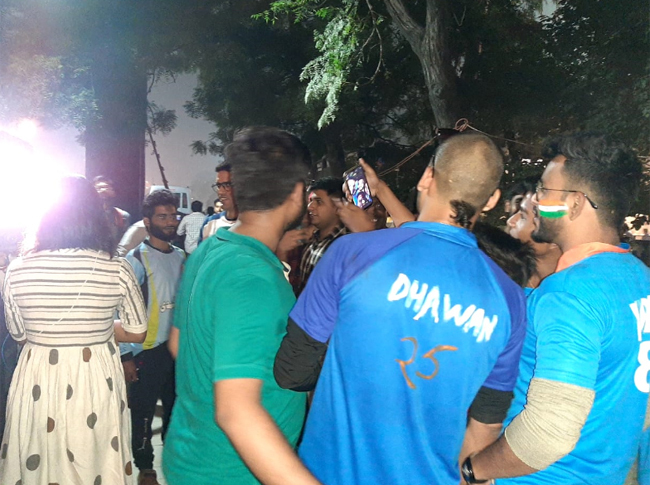 “Not just at the cricket stadium, some incidents happened with me at wedding ceremonies as well. Two years back, I attended a wedding. That time I had a twirled moustache like Shikhar sir. I got ready and wore a kurta-dhoti for that wedding. When I entered, some children started shouting ‘Shikhar Dhawan aya hai, Shikahr Dhawan aya hai’,” he said.


When Ram Bahadur and his wife were blessed with a baby boy in 2018, they named him Zorawar, after Shikhar’s son. 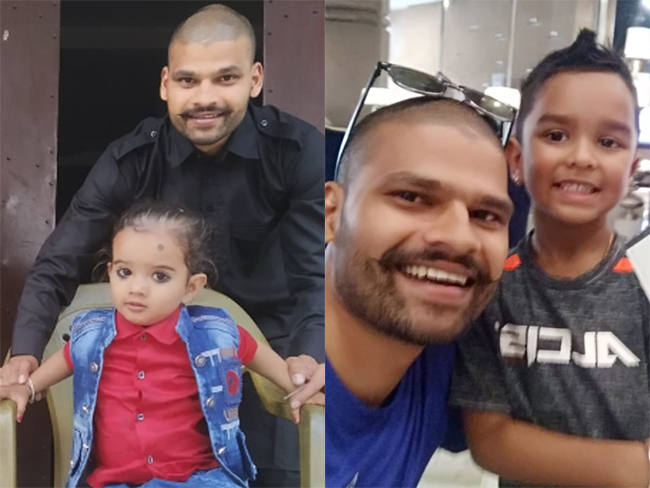 “It was pre decided. Had it been a girl, I would have named her Aliyah. I named my son Zoravar. I told the same to Shikhar sir. He was so happy and blessed the little one,” he said.

“On the birthdays of Shikhar sir (December 5) and Zoravar (December 26), I order cakes and buy blankets and distribute them all among the poor,” Ram Bahadur signed off.